Stabilizing Christian teaching in the country

Zimbabwe remains a repressive state. There are still political prisoners. From 1987 - 2017, the country was ruled by President Robert Mugabe as a dictator. From 26 August 2018 onwards, Emmerson Mnangagwa took over presidential powers after winning the 2018 Zimbabwean general election. Hunger, unemployment and energy shortages are causing many people to flee to their neighbouring countries. At first glance, the country is very Christian. Officially, 85 percent of the population are Christians. But the Christian faith contents are partly mixed with the nature-religious conceptions like ancestor worship. The Shona religion, in which communication with the world beyond takes place through spirits hosted by a medium that can "pass on their voice", is also widespread in Zimbabwe. A further category are the Mashawe spirits coming from deceased strangers who restlessly roam until they settle in a person who falls ill and is brought to a healer (Nganga).

The aim of the LOGOS mission with the two Bible schools is to consolidate the 60 students in total in the Word of God and to stabilize Christian teaching. The graduates should then pass on what they have learned and train to become disciples of Jesus. Both Bible schools with 30 students each are located in the capital Harare and are led by Pastor Bob. 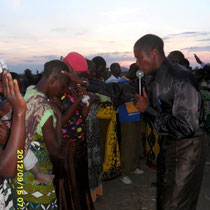